Pūkaha National Wildlife Centre has officially opened as a wedding venue. The 942-hectare reserve, which also doubles as a captive breeding site for critically endangered native birds, has launched two options as either venue hire or all-inclusive.

“Our all-inclusive package makes the most of the wonderful local talent we have on our doorstep,” says commercial development manager Sarah Watkins, “and both options include the use of our reception room and ceremony space down in the redwood grove”.

The packages give people the chance to combine their special day with the wildlife projects Pūkaha is known for.
“All proceeds go back into the work we do with our birds, including pāteke, whio, all three types of kākāriki, tūturuatu and North Island brown kiwi. These options are perfect for those looking for an intimate ceremony immersed in nature that also contributes positively to local business and conservation. All are welcome”.

Pūkaha is just five minutes from the boutique Mount Bruce Lodge, as well as the many accommodation and vineyard options of the Wairarapa.

At the end of May, the Centre released yellow-crowned kākāriki into the wild and are now due to send pāteke to Isaacs Conservation Trust in the upcoming weeks.

Mount Bruce, Masterton: Pūkaha National Wildlife Centre has welcomed the world-travelling Giant Wētā, a sculpture designed and made by the Auckland Burners. The wētā attended the Burning Man festival in 2016 before being donated to Pūkaha in 2019.

“Pūkaha is honoured and delighted to be the new home of this extraordinary sculpture that has been created through an enormous amount of time, energy and skill by the Auckland Burners,” Emily Court, Pūkaha’s general manager, states.

The sculpture marks the entrance to Te Wāhi Wētā, Pūkaha’s newest attraction, which highlights the importance of our endemic wētā species.

“Te Wāhi Wētā is special because it not only creates a unique experience but helps to teach the importance of our wider ecosystem. We are really grateful for the support of Innes Dean Lawyers who have kindly funded a large portion of the costs involved with setting up Te Wāhi Wētā”.

Te Wāhi Wētā opened with a special launch that was attended by the Auckland Burners and which also included a cultural night walk lead by local Rangitāne writer and researcher, Joe Potangaroa.

“Pūkaha is committed to representing Rangitāne and the te Reo language. This is the first new space we’ve made since making this commitment and we have taken care to incorporate more of their stories from the forest. This has been overseen by our Cultural Tourism Advisor, Wayne Pitau, a position we have recently developed”.

Te Wāhi Wētā is open to the public and can be found within the Pūkaha reserve. 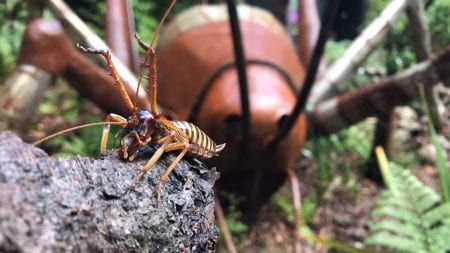 Big changes ahead for the National Wildlife Centre

Mount Bruce, Masterton: Pūkaha National Wildlife Centre has started 2019 with a bang by hiring an all-new marketing team.  The Centre is aiming to grow their visitor numbers and expand their conservation work significantly over the coming year.

“This is the beginning of a whole new era for Pūkaha,” explains Bob Francis, chairman of the Pūkaha Mount Bruce Board for the last 12 years, “The Board is committed to growing the business for conservational and commercial reasons.  For the first time in our history, we have set goals to really grow and so we have invested heavily in the new talent we need to help achieve that.”

“We’re taking it to levels never seen before,” adds Emily Court, Pūkaha’s General Manager, “This is amazing for the whole region, not just for Pūkaha, because the better we do, the better our people do, contributing to local business in the Tararua and Wairarapa.”

Pūkaha’s visitor numbers are currently tracking at 53.7% higher than this time last year.

Pūkaha returns juveniles to the forest

Mount Bruce, Masterton: Mana and Marama, two kiwi chicks hatched at Pūkaha National Wildlife Centre, have been returned into the forest. The eggs were taken from Pūkaha as part of the national “Operation Nest Egg”, where chicks are raised in captivity before being released into the wild.

“Male kiwi actually incubate the eggs for about 80 days,” Jess Flamy, head ranger, explains, “and we take the eggs around day 60.  Kakama is a male kiwi that gives us eggs season after season – he’s a wonderful Dad – and we track him using telemetry and a leg transmitter”.

The conservation status of kiwi varies from recovering to nationally critical mainly due to predation by introduced mammals such as stoats, with eggs and chicks particularly vulnerable.

The two chicks were named as part of a MoreFm Manawatu campaign in 2018. Mana was voted on by the general public while Marama was named by Wairarapa mayor, Lyn Patterson.

Pūkaha National Wildlife Centre is releasing 4 juvenile shore plover (tuturuatu) on to Motutapu island.  The birds, which are critically endangered and number just 250 approx. in the world, are endemic to New Zealand and one of the world’s rarest shore birds. Pūkaha are hoping to release more shore plover juveniles, aiming for 21 released birds by 25/3/19, meaning that they are breeding roughly 10% of the current population.

“This season has been very full on,” says Mireille Hicks, lead shore plover ranger at Pūkaha, “Together with the Isaac Conservation and Wildlife Trust, this would be our most successful year yet. Between us we have so far raised 46 shore plover chicks – and there are more on the way! We have 7 breeding pairs in total, 2 of which are breeding in their first season, which was incredible.  We also have a breeding pair that was very unexpected, as the male had an injured wing and the female had an issue with her feathers. Due to these injuries they could not be released into the wild but by breeding in captivity they are actually contributing to the survival of their species”.

Motutapu Island in the Hauraki Gulf is the site of the world’s largest pest eradication programme and is also home to saddleback (tīeke).

“The shore plover is a very special bird because it’s naturally very curious, but it nests on the ground and is very small – it almost ‘shakes hands’ with predators!” continues Hicks, “They are also very nervous birds and can be easily frightened away from their nests.  Many people do not know about how critical the situation is which is something we’d like to change. Each bird is precious”.

In 2018, Pūkaha released 6 juveniles hatched from 5 pairs on to Waikawa Island.  The Shore Plover Recovery Programme began at Pūkaha in the early 1980’s.

Endangered ducks successfully move on to fast-water training in Turangi

Jimmy and Jazzy, the star breeding whio (blue duck) pair at Pūkaha National Wildlife Centre, have done it again, with their second clutch of the 2019 season off for their first taste of fast water at Turangi.

Whio, endemic ducks numbering approx. 3000 in the wild, are “torrent ducks”, so named for their unusual habitat in fast-flowing water and famously appear on the New Zealand $10 note.  They are considered nationally vulnerable due to loss of habitat and the predation of stoats (among others).

“The Whio Recovery programme has been going really well thanks to how well the general public have got behind it,” explains captive breeding ranger, Mireille Hicks, “They are a really special bird because of how unique their habitat is – they are one of only 4 ducks in the world that go against fast-flowing currents.”

After being reared at Pūkaha by a team led by Ali Hull, the juveniles are sent to Turangi for some practice in the fast-flowing water before being released into one of the Central North Island’s strictly monitored zones.

“These birds are perfectly adapted for the fast-flowing water,” continues Hicks, “and they love getting in to it for the first time at Turangi. They are really important for the ecosystem and help to keep the water clean, using special ‘lips’ on their beaks to scrape insects off the rocks. Whio require really clean water so their presence indicates how healthy a river system is”.